. The premise of the book is that painters have been familiar with the use of optical aids since at least the early 15th century and possibly as early as the second. As Mr. Hockney points out, it is only in the last few years that improvements in art reproduction, and internet access to high resolution images of the great collections, have made his research possible. He created a wall of images arranged in a timeline that allowed him to see the startling trends and changes that took place.

Contrary to the accusations of his opponents he doesn’t suggest that all, or even most, artists were copying projected images. These critics hotly deny that the “Old Masters” would have needed any assistance and were more than capable of drawing realistically without optical aids but I don’t think that is his point. Although it is in fact perfectly possible (though darned difficult) to create photo-realistic images by eye alone, nobody actually did so until the Dutch introduced a startlingly different style of painting, quite suddenly, in the early 15th century.

Starting with van Eyck, the style of rendering, especially the human figure, but also still life, changed within a remarkably short span of years. It wouldn’t have been necessary for all artists to be using lenses and mirrors as artists have always learned by copying their masters. When the masters learned by copying a two dimensional projected image, a whole new style of drawing was born and this style would have been copied by those who came after.

His thesis fascinates me despite the fact that it is often dismissed as a crackpot theory and he is in fact vilified by some of his detractors. It is obviously a very emotional issue for some people who find it necessary to make highly personal attacks on Mr. Hockney in order to refute his theories. Actually I got the impression that some of his critics had not in fact read the book, or only skimmed it very superficially. This is unfortunate because it isn’t actually very long. I have always been attracted to controversial theories and I think that Mr. Hockney makes some excellent points. This book is definitely worth a read and it is so lushly illustrated that I felt the need to add it to my collection.

There is an article in today’s Guardian about one of my favourite daily painters.

<<In 1997, Julian Merrow-Smith lost his job at London’s LumiÃ¨re cinema. An art-school graduate, he bought a ticket to the south of France and began painting for a living. By 2004, he was making “about enough to survive on”. Then he came across a US artist, Duane Keiser, who was doing a painting a day: small oils, mainly still lifes, posted and sold on the internet.

“I thought: hmm, there’s a living to be made here,” says Merrow-Smith, a chirpy voice on the line from his studio near the village of BÃ©doin in Provence. So he set up a website and began painting postcards: perfect little 4in x 6in oil-on-gesso pictures of, say, vegetables from his garden or fruit from the market, and luminous, ever-changing ProvenÃ§al landscapes. “What was important, at bottom, was that they reflect this place,” he says.

The first two sold instantly, for his fixed price of $100. Within a few months he was selling most days. Then in 2006 the New York Times found him. “That night I sold everything I’d ever painted, most of it more than once,” he says. “It was crazy. For weeks I had 500 people wanting to buy every postcard. I spent my days organising credit-card refunds.”

So now his site, shiftinglight.com, hosts an auction, each work selling to the highest bidder at 10pm each night, generally for between $150 and $650. “I have 3,000 subscribers to my mailing list, and a few real collectors,” Merrow-Smith says. “There are people with 25 or 30 of my works, and people who buy one a year.”

On Friday, he will paint his 1,000th Postcard from Provence. Each takes up to three hours, “depending on how much wine I’ve drunk the night before”. Some weeks, he concedes, “I’m throwing things at the wall in frustration. But then people tell me it’s the only email they actually look forward to getting. I’m making a living, but I’m also spreading a little joy. It is satisfying.” >> 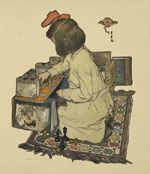 This is one of my favourite art videos, brilliantly conceived.

Al Hirschfeld was a truly original artist famous for his caricatures of celebrities. He depicted stage and screen personalities, capturing the magic of American theatre with his line drawings.

He was born in St. Louis in 1903. When he was eleven years old, an art teacher informed his mother, “There is nothing more we can teach him in St. Louis.” The family moved to New York and soon he was enrolled at the Art Student’s League. By the age of 17, Hirschfeld was an art director at Selznick Pictures. He held the position for about four years and then in 1924 moved to Paris.

In 1943, Hirschfeld married one of Europe’s most famous actresses, the late Dolly Haas. They were married for more than 50 years. His daughter Nina was born in 1945, and ever after Hirschfeld hid her name at least once in each of his drawings. The number of NINAs concealed is shown by an Arabic numeral to the right of his signature.

Hirschfeld was initially attracted to sculpture and painting but this gave way to his passion for pure line. His devotion to line stems from his respect for absolute simplicity. He is quoted as saying:

When I’m rushed I do a complicated drawing. When I have the time, I do a simple one.”

Over his 82-year career Hirschfeldâ€™s work appeared in nearly every major publication and on everything from book and record covers to postage stamps.

Although Hirschfeldâ€™s work is described as â€˜caricatureâ€™, he does not mock his subjects. He had tremendous affection for the people he drew and his affection is clearly communicated in his work. In fact, it is considered an honour to be drawn by Hirschfeld, and many celebrities own their Hirschfeldsâ€.

He died in 2003 at the age of 99, he was working up until shortly before his death

Kitty de Cheveigné was my husband’s aunt. Born in India to missionary parents, her father was English and her mother Canadian. She grew up mostly in Europe, living at Versailles for a while when her father was vicar there (who knew that there was an Anglican parish at Versailles?). She attended art school, (I am not sure where, RCA I think, or maybe the Slade) and worked as a nurse during the Second World War. She married a hero of the French resistance, Maurice de CheveignÃ© and lived in France for most of the remainder of her life. They had a small farm in the Pyrennees and she started painting again in her middle years. We have a few of her paintings from that time and I think they are very fine. She will probably never be famous, but perhaps by posting these here a few more will get to appreciate her great talent.

I went to Riverbrink today, Jonathan was playing at their open house and I have been meaning to go there for years. They have a lovely location and an impressive collection, supplemented at the moment by loans from galleries in New York.

Samuel Edward Weir, Q.C. was born in 1898, and was a lawyer in London, Ontario. He began collecting art in his twenties; pieces by Homer Watson and Dame Laura Knight (I hadn’t known her work before, really nice) were among the first. In the 1940s he bought land along the Niagara River, in the village of Queenston and built a house there which he called Riverbrink. He retired there in 1970 and died in 1981, leaving his home and art collection in the care of The Weir Foundation. It officially opened as a gallery and museum on June 15, 1983.

Weir collected some 160 works that illustrate the immediate area around Niagara Falls, as well as works that show the history and development of Upper and Lower Canada in the eighteenth and nineteenth centuries. The collection contains pieces by many of the important Canadian painters and sculptors who worked before and into the early years of the twentieth century, including Cornelius Kreighoff, Paul Kane, Marc-AurÃ¨le de Foy Suzor-CotÃ©, Tom Thomson and members of the Group of Seven.

Exhibits are changed annually, with almost 200 artworks on display each year. Of 1,000 or so pieces of fine art in the collection, almost seventy percent are Canadian. The other thirty percent is by American and European artists, including pieces by Jacob Epstein and Augustus John.