Al Hirschfeld was a truly original artist famous for his caricatures of celebrities. He depicted stage and screen personalities, capturing the magic of American theatre with his line drawings.

He was born in St. Louis in 1903. When he was eleven years old, an art teacher informed his mother, “There is nothing more we can teach him in St. Louis.” The family moved to New York and soon he was enrolled at the Art Student’s League. By the age of 17, Hirschfeld was an art director at Selznick Pictures. He held the position for about four years and then in 1924 moved to Paris.

In 1943, Hirschfeld married one of Europe’s most famous actresses, the late Dolly Haas. They were married for more than 50 years. His daughter Nina was born in 1945, and ever after Hirschfeld hid her name at least once in each of his drawings. The number of NINAs concealed is shown by an Arabic numeral to the right of his signature.

Hirschfeld was initially attracted to sculpture and painting but this gave way to his passion for pure line. His devotion to line stems from his respect for absolute simplicity. He is quoted as saying:

When I’m rushed I do a complicated drawing. When I have the time, I do a simple one.”

Over his 82-year career Hirschfeldâ€™s work appeared in nearly every major publication and on everything from book and record covers to postage stamps.

Although Hirschfeldâ€™s work is described as â€˜caricatureâ€™, he does not mock his subjects. He had tremendous affection for the people he drew and his affection is clearly communicated in his work. In fact, it is considered an honour to be drawn by Hirschfeld, and many celebrities own their Hirschfeldsâ€.

He died in 2003 at the age of 99, he was working up until shortly before his death

A perennial question that continues to come up in various fora that I belong to. Also one to which I, like most “artists”, have given a great deal of thought. I thought I would do a series of posts on the subject, as much to organize my own thoughts on the matter as anything. My first is just a quote from Wikipedia

Art refers to a diverse range of human activities and artifacts, and may be used to cover all or any of the arts, including music, literature and other forms. It is most often used to refer specifically to the visual arts, including media such as painting, sculpture, and printmaking. However it can also be applied to forms of art that stimulate the other senses, such as music, an auditory art. Aesthetics is the branch of philosophy which considers art.

Traditionally the term art was used to refer to any skill or mastery, a concept which altered during the Romantic period, when art came to be seen as “a special faculty of the human mind to be classified with religion and science”.[1]

Generally art is a (product of) human activity, made with the intention of stimulating the human senses as well as the human mind; by transmitting emotions and/or ideas. Beyond this description, there is
no general agreed-upon definition of art. Art is also able to illustrate abstract thought and its expressions can elicit previously hidden emotions in its audience.

Kitty de Cheveigné was my husband’s aunt. Born in India to missionary parents, her father was English and her mother Canadian. She grew up mostly in Europe, living at Versailles for a while when her father was vicar there (who knew that there was an Anglican parish at Versailles?). She attended art school, (I am not sure where, RCA I think, or maybe the Slade) and worked as a nurse during the Second World War. She married a hero of the French resistance, Maurice de CheveignÃ© and lived in France for most of the remainder of her life. They had a small farm in the Pyrennees and she started painting again in her middle years. We have a few of her paintings from that time and I think they are very fine. She will probably never be famous, but perhaps by posting these here a few more will get to appreciate her great talent.

I went to Riverbrink today, Jonathan was playing at their open house and I have been meaning to go there for years. They have a lovely location and an impressive collection, supplemented at the moment by loans from galleries in New York.

Samuel Edward Weir, Q.C. was born in 1898, and was a lawyer in London, Ontario. He began collecting art in his twenties; pieces by Homer Watson and Dame Laura Knight (I hadn’t known her work before, really nice) were among the first. In the 1940s he bought land along the Niagara River, in the village of Queenston and built a house there which he called Riverbrink. He retired there in 1970 and died in 1981, leaving his home and art collection in the care of The Weir Foundation. It officially opened as a gallery and museum on June 15, 1983.

Weir collected some 160 works that illustrate the immediate area around Niagara Falls, as well as works that show the history and development of Upper and Lower Canada in the eighteenth and nineteenth centuries. The collection contains pieces by many of the important Canadian painters and sculptors who worked before and into the early years of the twentieth century, including Cornelius Kreighoff, Paul Kane, Marc-AurÃ¨le de Foy Suzor-CotÃ©, Tom Thomson and members of the Group of Seven.

Exhibits are changed annually, with almost 200 artworks on display each year. Of 1,000 or so pieces of fine art in the collection, almost seventy percent are Canadian. The other thirty percent is by American and European artists, including pieces by Jacob Epstein and Augustus John.

Just goes to show you should always check attribution. On further research I have discovered that this quote has also been attributed to Louis Nizer who was also supposed to have come up with “A beautiful lady is an accident of nature. A beautiful old lady is a work of art.”

Of course Nizer lived several hundred years after St. Thomas, so it might have been an appropriation.

St. Thomas apparently did say: ” The test of the artist does not lie in the will with which he goes to work, but in the excellence of the work he produces.“

This article is a couple of years old but I only just found it on another blog.

And here is another one about Duane Kaiser. 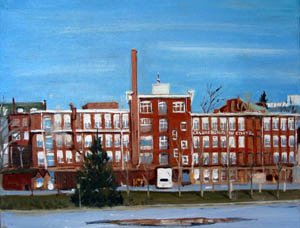 Hugh and James McSloy established the Canada Hair Cloth Company in 1884. In 1888 they bought a parcel of land behind St. Paul Street from the Dolphin Paint Company and built a 3 storey brick building. The site was ideal because it was next to a mill-race where water wheels provided the power to run the machines. Within a few years they bought an electrical generator which used the mill wheel as its turbine making it the first company in St. Catharines to use electricity. The Canada Hair Cloth business stayed in the family until sold in 1996.

The Welland Canal was the first Canadian canal built for both transportation and waterpower (1824 & 1833). St. Catharines was one of the main water-powered industrial centers along the canal. Remains of the raceways can still be seen behind the Canada Hair Cloth building and the name Race Street reminds us of the city’s hydraulic heritage.