I don’t often post WIPs, mostly because every time I do I seem to change my mind or abandon the piece altogether. Not only that but I am posting this from my iPod, not an easy feat but I wanted to try out the WP app and I used a nifty scanning app to take the picture.
This is going to be another in my morning on the river series, larger than usual at 16″x20″. If it works out I will keep on with daily updates. 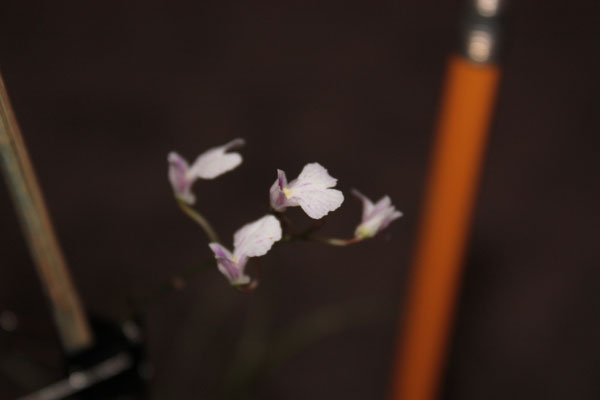 This tiny orchid traveled back with me from Puerto Rico. I pulled it off an orange tree and it was in a pocket of my shorts. I have been nurturing it for four months and it has finally repaid me with this delightful little flower, only a centimetre or so across. The pencil gives some idea of the scale.

Ancient Egyptian Blue found in 12th century church
A team of researchers from the University of Barcelona has discovered remains of Egyptian blue in a Romanesque altarpiece in the church of Sant Pere de Terrassa in Barcelona. This blue pigment was used from the days of ancient Egypt until the end of the Roman Empire, but was not made after this time. So how could it turn up in a 12th Century church?in

I subscribe to a number of esoteric blogs, many of them not directly related to art. I am fascinated by pigment and its history so this little mystery in “Medieval News” today caught my attention.

There is a fascinating article on Medievalist.net. I am not sure I understand it but it points to a technique used by the Celtic monks that might well be worth cultivating. 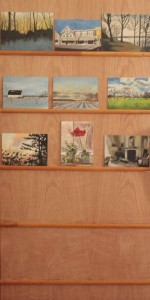 I got tired of having my little paintings festooning every window and door frame in the house. I actually made this very rudimentary rack to display some of them for a craft show I went to in the Fall, but it works very well as a place to dry my oils.

Here is my further progress on my pet portrait commission. I have tried to punch up the contrast a bit but I am still very unsure of the expressions. My source material is so scant and I barely know the annimals in question having only “met” them once. I guess I will let this dry for a bit and then finish it off. 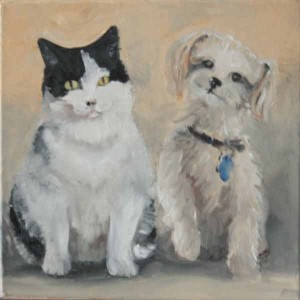 I have always avoided commissions (usually by quoting such an exorbitant price that I manage to scare the client away). I was once asked to do something “about this big” (gesture with hands to indicate a piece about 24″X36″) in “browns and blues to go over my daughters bed”. Her budget was around $200, I suggested she visit imagekind and select something she liked. I have finally got a commission that I haven’t been able to avoid though. It is a portrait of two pets, the only “children” of a couple of friends of mine. I visited and tried to get some photographs but was unable to catch them together, I also have a couple of snapshots provided by the client, one is literally of their backs. I have put together a pastiche with Photoshop and am trying to paint something from that. I kinda feel like it is the commission from hell. I have never been a pet portraitist, the only animals I have painted being my own, ones I know intimately and don’t really need photos for.

Here is my progress so far. I will come back to it after the holiday and see if I can pull my ass out of the fire.

I spend some time worrying about my lack of personal style and I know I am not alone in this, recently a few other bloggers have raised this issue, notably Catherine Jeffrey and Mary Anne Cary.

Robert Genn runs an interesting blog called “The Painter’s Keys”. This week he wrote an article about Claude LÃ©vi-Strauss and his theories on individuality in art The artifacts of our cultures. It was LÃ©vi-Strauss’s contention that originality is only a requirement of recent Western culture. In other societies (not just “primitive” ones) the role of the artist has been to study the forms and styles of the past masters and reproduce them as closely as possible. Innovation is something that merely evolves over time and is often accidental. Our current obsession with originality is quite new and is not actually considered necessary in all art forms. Musicians still seem to consider it quite all right to spend their lives studying and performing the creations of others and even amongst composers and popular song-writers it is OK, in fact expected, to borrow styles from the past.

Now something about us. If we enter our studios with the idea that we are simply going to dip once more into the pot, our little egos may just float off into Neverland. Work might become the simple honouring of past myths and current genres. While that thought may be upsetting for some, this approach kind of makes you feel good. It may even promote a new freedom of expression, and unburden the artist from a stifling egocentricity. Taking part in a great and noble tradition, we might take the pressure off.

Art doesn’t have to be about anything to be good. In fact, the easier it is to say what a work is about, the less interesting that work becomes. The greatest art takes a lifetime to understand; the slightest takes a moment. And if it really is reducible to an explicit message, is it actually art at all?

Thank you Jonathan Jones, I couldn’t have said it better. Not that I am claiming my scribblings to be “Art”. I have long maintained that I am merely a painter, not an “Artist” and I would rather be compared to a good illustrator or graphic artist than someone who claims to make “Art”.

I have written about this sort of thing before, I have spent my life fighting against the idea of there being any kind of meaning in my paintings. I was steered away from a career in art by a high school teacher who felt that my ability to draw was of no account because my paintings didn’t “say” anything.

Am I being impossibly stuffy when I admit that bad spelling drives me crazy? So many of my fellow bloggers seem to make certain elementary spelling mistakes over and over again. I don’t mean typos, which we all make from time to time, or misspelling of unusual, seldom used words. The ones that drive me nuts are the ones that I thought we all had drilled into us in primary school: to, too, two, their, there, picture, pitcher. Actually I saw this last one misspelled outside a school just the other day, as in “Don’t forget pitcher day September 29th”, sad really.

I also find it rather sad that so many Canadians don’t bother to change the default US dictionary when they install software programs. A whole generation is growing up assuming that the only correct way to spell colour is “color”, centre is “center” and honour is “honor”.

I suppose that distinctive Canadian spelling may have reached the end of its usefulness, but there will always be a need to distinguish between pictures and pitchers. On Halloween it’s a good idea, when looking at two small crones, to know which witch is yours even when they’re the same size and their costumes are similar too.